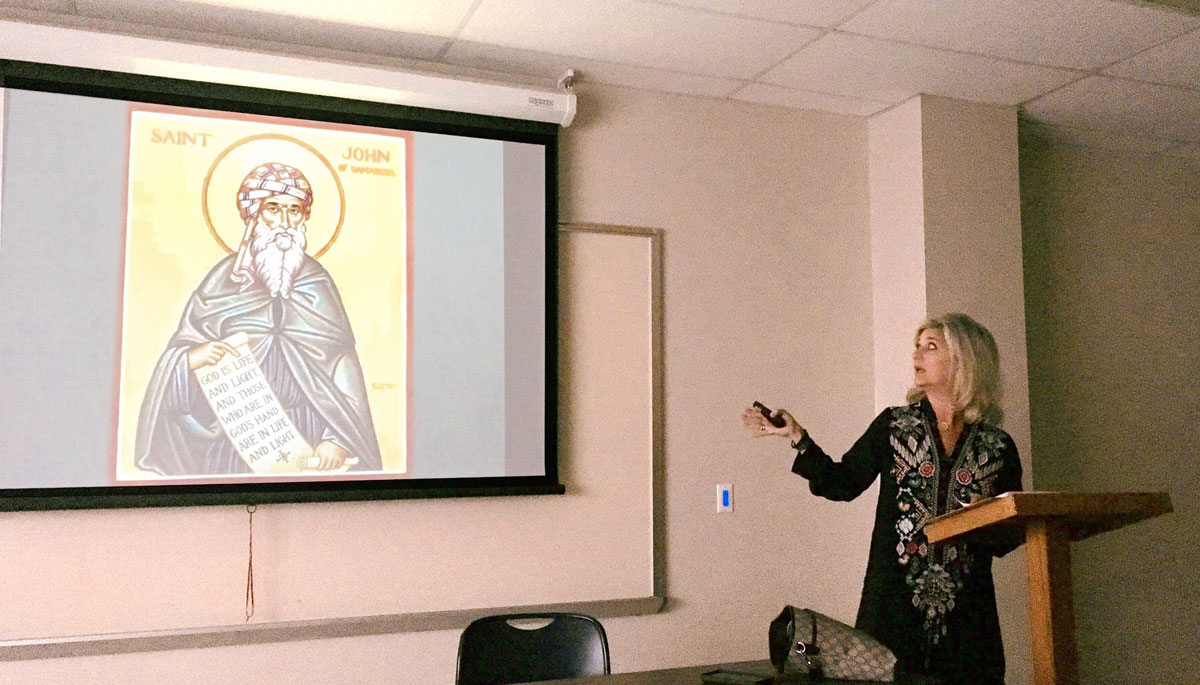 International artist Joni Zavitsanos taught a class at Annunciation Greek Orthodox Cathedral in Houston in March on icons and the 7th Ecumenical Council of Nicaea. She explained this council addressed the question because the Empress Irene felt strongly that icons should be reinstated after the objects were systematically removed and destroyed around the year 723. They had been banned from use in churches and homes for over 120 years.

Ms. Zavitsanos shared with the class the key arguments and strategies used by both sides in this important council and discussed how and why icons are venerated rather than worshiped in the Greek Orthodox Faith. On one side of the ancient argument were the Iconoclasts, or Icon Smashers, those suspicious of any art depicting God or humans. To them, the icons were idolatry. And on the other side were the Iconodules, or Venerators of Icons, who defended the art’s place in the Church.

She explained that those wary of icons were in the Church and in other religions and that this debate had in some ways been going on for many years. The arguments related to diverse views of the very core of the religion, the nature of Christ and the relationship between the spiritual and the material. Those supporting the icons saw them not as idols but symbols, that were not to be worshiped but to be a veneration of God, Ms. Zavitsanos said.

The debate ended in the Proclamation of the 7th Ecumenical Council of Nicaea stating: “Icons are to be kept in Churches and honored with the same relative veneration as is shown to other material symbols, such as the precious and life giving cross and the Book of the Gospels.”

Ms. Zavitsanos taught the class wearing a special black dress with a colorful design that she wore to her father’s funeral to honor his creativity. Her interest in art was inherited from and nurtured by her father, renown Byzantine iconographer Diamantis Cassis, so she chose to wear the dress for this class as a symbol of her thoughts of him.