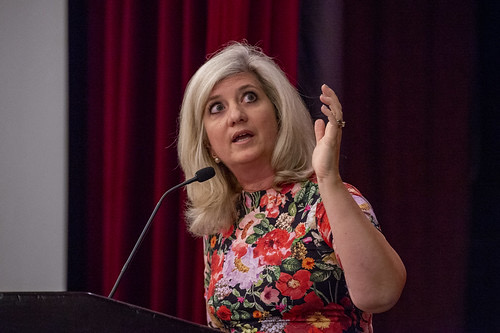 International artist Joni Zavitsanos was honored in New York City in October at the annual Archon Weekend and Assembly of the Order of Saint Andrew for her work in educating people about the Orthodox Faith through her modern Byzantine images.

The weekend focused on efforts to secure religious freedom for the Mother Church of Constantinople and welcomed the 2019 Class of Archons. An Archon is the highest honor that can be bestowed upon a member of the laity within the worldwide Greek Orthodox Church.

Ms. Zavitsanos was not the only member of her family to be honored at the Archon Weekend. Her husband, Houston attorney John Zavitsanos co-founder of the law firm of AZA, was awarded the prestigious 2019 Nicholas J. Bouras Award for Extraordinary Archon Stewardship at the annual award presentation.

Ms. Zavitsanos gave an October 19 luncheon speech to the Archons titled “Byzantine Art in the Modern World and Transformation of the Heart.” She discussed how she is inspired by her late father, the artist and iconographer Diamantis John Cassis.

She told the group that she discovered her father’s college paper that asked the question, “Is modern art simply ‘art for art’s sake’, or can it strive to be edifying in a similar manner to the ancient Byzantine image?”  That was Ms. Zavitsanos’ own quest, and at that time she had no idea it was also her father’s goal.

She discussed how her father opened the door and she is continuing his search to merge the sacred and the secular in a way that creates a meaningful expression in today’s world, and in his words hopefully create “Art for man’s edification.”

Two principles of art guide both her and her father: the universal peacefulness and serenity of Byzantine art and the more individualistic art of the Western World to create a more meaningful expression.  “I want to show the events which the icons represent in a modern day setting so as to show how these miracles and saints would look today within the context of our fallen world,” she told the group.

“Education of the Faith through the talent God has given me is my passion.  I hope to transform hearts and, in the process, transform my own as well.  Mostly, I hope I can make my father proud of me,” she concluded.